as provided by the late Mr Goronwy Davies

There is a great deal of mist over the beginning of Sardis’ history, as like many churches, no records were kept. About 150 years ago there were a lot of religious families belonging to the Independents living in Waunarlwydd; they were mostly miners and farm workers, with well-to-do people. Coalmines were opened and new houses built and the population grew in numbers.

A then local farmer (who formed the farm Bryn Dafydd which still remains in Penllergaer) bought land in order to build a place of worship in the village. The land was transferred in 1852 and the schoolroom was big enough to seat 80 people. Prayer meetings were held here as well as other weekly religious gatherings. In this year a church was opened in the village. Soon after, the then minister of Cadle, the Reverend William Humphries, preached in the schoolroom and promised the people present that he would help to build a chapel. As a gesture of his promise he went into Swansea the following day and bought £50 worth of wood in order to begin the work. This was in the autumn of 1859 and the chapel was ready the following spring. 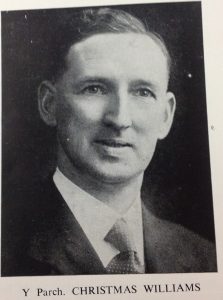 The chapel was opened on 24th May, 1860 and had cost £423. The first minister to be ordained in Sardis was the Reverend John Bevan in 1861; the chapel membership was in debt of £376. This sum was tremendous in those days, especially as the membership was small but within 6 years the debt was cleared. In 1878 the building was added to and stone walls were built on both sides of the graveyard at a cost of £600. The membership when Reverend Bevan came to Sardis was just 70 but during his ministry there he accepted over 900 new members.

Reverend Bevan was also instrumental in bringing education to the children of Waunarlwydd and offered the use of the schoolroom, now the vestry, as a place of learning. He also fought to have letters delivered to the inhabitants of Waunarlwydd twice weekly, and thanks to him, it was not long before the village had its own post office.

The Reverend Bevan retired after 46 years at Sardis and he was followed by the Reverend D.M.Davies,  who was ordained in 1908. Soon after this a new manse was built, the chapel extended and a magnificent organ installed and opened on 4thDecember 1909.

Reverend Davies was succeeded by the Reverend Rhedynug Evans,  who started his ministry on the Whitsun of 1922. He in turn was succeeded by Reverend D.H.Fisher  (later to move to Mumbles), followed by  Reverend Stanley Jones then Reverend Christmas Williams in 1953.

Sardis’ last minister was the Reverend Pryce Jones whose sole ambition was the care of the flock of Sardis. This he did with love and nothing was too much for him, turning his hand not only to the spiritual work but helping in any task around he chapel. Reverend Jones was ordained on 11thApril 1985 and retired in 2005.

This is a picture of the Manse on Victoria Rd, the old home of the resident reverend for the chapel, it is now the location of Tŷ Victoria nursing home.

The Manse on Victoria Road

Theme by Anders Norén — Up ↑